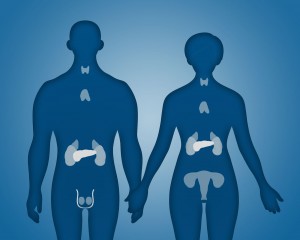 The endocrine system is a set of glands that produce hormones (chemical messengers) and release them throughout the body, regulating growth, development, metabolism, tissue and sexual function, mood, sleep and behavior. In addition, the endocrine system maintains stability of the body’s internal environment (homeostasis) in response to changes in external conditions.

Changes in the endocrine system can be caused by a variety of factors, including aging, certain diseases and conditions, stress, genetics and diet. Many substances, both natural and synthetic, can interact with the endocrine systems of humans and wildlife. Most endocrine active substances (EASs) will only produce biological changes within a living being’s normal operating range (homeostatic capacity) or be detoxified by metabolism and therefore, do not cause adverse effects.

EASs can be found in a variety of chemical classes, including natural products from plants and other living organisms, pharmaceuticals, crop protection products, and consumer and industrial manufacturing products. A large number of EASs of natural plant origin are consumed as food or feed, such as estrogenic compounds in soy (e.g., genistein and daidzein), mycotoxins (e.g. zearalenone) in cereals, and goitrogens in cabbage (glucosinates). Other common EASs are caffeine and sugar.

Such EASs do not cause harm at doses commonly consumed and there are wide margins of exposure between the dose consumed and the dose required to cause an adverse effect. Similarly, chemical products commonly regarded as potential endocrine disruptors (EDs) may actually be EASs under normal use conditions and therefore, do not cause adverse effects.

Substances that upset homeostatic systems and cause adverse health effects are regarded as EDs. Adverse effects reduce a living being’s functional capability that may result in a change in its shape, function, growth, development, reproduction or life span.

The World Health Organization’s International Programme on Chemical Safety (IPCS) defines an ED as “an exogenous substance or mixture that alters function(s) of the endocrine system and consequently causes adverse health effects in an intact organism, or its progeny, or (sub) populations.”

Under this widely accepted definition, for a substance to be regarded as an ED, it must cause an adverse effect in an intact organism or (sub)population by an endocrine mode of action. The IPCS defines a mode of action as: “The biologically plausible sequence of key events, starting with the interaction of an agent with a cell, through functional and anatomical changes leading to an observed effect supported by robust experimental observations and mechanistic data.”

The reference to “consequently” in the IPCS definition of an ED provides an additional requirement for the demonstration of a biological plausible causal relationship between the adverse effect and endocrine mode of action.

It is important to note that endocrine disruption is not an adverse effect in itself; it is a mode of action leading to an adverse effect which manifests as carcinogenic, reproductive or developmental effects. These effects are observed in regulatory toxicological and ecotoxicological laboratory animal studies.