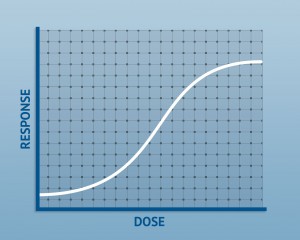 “Low-dose effects” refers to effects claimed by some scientists to occur at dose levels below those tested in standardized toxicology studies. Although no scientific consensus has been reached in defining “low doses,” the term is typically used to describe doses below the No Observable Adverse Effect Level (NOAEL) or below a level that is environmentally relevant to humans. NOAELs are determined by toxicity tests in rodents.

Some scientists claim that environmental exposure to certain chemicals can mimic hormones capable of causing effects in laboratory studies at low doses and that these effects may not be detected because standard toxicology studies are typically performed at higher doses.[1] This is the “low-dose” hypothesis (i.e., low doses produce effects not observed at high doses). There is currently no consensus regarding the existence and/or relevance of low-dose effects and they remain an issue of considerable scientific debate.

The low-dose concept is not unique to endocrine disruption as it could be applied, in theory, to all classes of chemistry and relevant to all toxicological modes of action. But if this concept was proven and accepted across the board, there would be profound consequences for current testing approaches for chemicals, such as the ability to determine thresholds and set regulatory reference values (safety limits). However, there are important reasons to question the assertion of low-dose effects:

As a result of these issues, the USEPA has commissioned the National Academy of Sciences to investigate low-dose effects and endocrine-disrupting chemicals by applying a systematic review process to critically evaluate all available data. This report will be considered by regulatory authorities prior to considering any changes, if any, to the currently well-established, regulatory testing system for crop protection products and other chemicals.