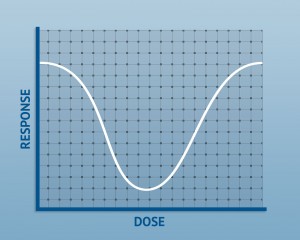 Non-monotonic dose responses (NMDRs) go against predictable or typical dose-response patterns which show that as the dose increases, so does the effect (monotonic). With NMDRs, the dose-response curve changes direction within the range of doses examined, creating unusual curves, such as “U” or inverted “U” shapes.

Current testing guidelines require multiple doses of a substance to be evaluated, usually in a significant number of laboratory animals per sex, per dose group and across three or more treatment groups. From these studies, dose-response curves are determined to show the relationship between a chemical’s concentration and observed effects. Typical dose-response curves are monotonic, meaning a greater response is observed as the dose increases (i.e., “the dose makes the poison”). However, some scientists (e.g., Vandenberg et al. 2012)[1] claim that for endocrine disruptors, NMDRs are common, meaning a response may be greater at lower doses than higher doses. These scientists have suggested that NMDRs occur frequently such that current test guidelines may miss effects at low-dose levels and therefore, risk assessments may not be fully health-protective.

NMDRs have been the subject of several national and international workshops since 2000. If NMDRs occur for verifiable outcomes of exposure (endpoints), they would present a significant challenge to human health testing and risk assessment because they do not follow the expected observation of an increasing dose leading to a proportionally increasing frequency or severity of effect. The 2012 review by Vandenberg et al. evaluated more than 800 scientific papers and the authors concluded that when NMDRs occur, the effects of low doses cannot be predicted by effects at high doses and therefore, fundamental changes in chemical testing and safety determination are necessary to protect human health.[1]

In contrast, the Danish Centre on Endocrine Disruptors[2] analyzed the scientific literature and concluded that while examples of NMDRs do exist, they are not as common as claimed by Vandenberg et al. It also noted that the majority of data supporting NMDRs were from in vitro studies and that Vandenberg et al. had inappropriately included findings where U-shaped or inverted U-shaped curves were the result of general toxicity. The lack of structured weight of evidence and clear criteria in reviewing and including studies was also noted by Lamb et al. (2014)[3], which supported more “objective and systematic reviews that transparently capture the best available science and rely on explicit criteria for the evaluation of the evidence.”

The United States Environmental Protection Agency (USEPA) has initiated a comprehensive, scientific review of NMDRs focusing on endocrine disruption modes of action, particularly estrogen-, androgen- and thyroid-active chemicals. In 2012, it convened a working group of experts from several government agencies, which reviewed around 2,000 scientific documents. In 2013, the USEPA published a draft report entitled “State of the Science Evaluation: Nonmonotonic Dose Responses as They Apply to Estrogen, Androgen, and Thyroid Pathways and EPA Testing and Assessment Procedures.”[4] It concluded:

The U.S. National Academies of Sciences’ (NAS’s) Board on Environmental Studies and Toxicology reviewed the USEPA’s draft paper and provided its findings to the USEPA in May 2014.[5] Among many recommendations was a call to perform a systematic review of all available scientific literature and integrate it across multiple lines of biological evidence to confirm the existence of NMDRs and to what extent they might impact the ability of regulatory risk assessments to protect public health. The USEPA has commissioned the NAS to do so. The forthcoming NAS report will be considered by regulatory authorities prior to considering any changes to the currently well-established, regulatory testing system.

The European Food Safety Authority (EFSA) issued in May 2016 an external systematic review on NMDRs. Among the outcomes were suggestions for further analysis of data sets, review of methodologies when evaluating possible NMDRs and modelling of human data sets.  In effect, NMDRs and their relationship to regulatory science and risk assessment is still of questionable relevance. The EFSA noted “it may be concluded that the hypothesis that NMDR is a general phenomenon for substances in the area of food safety is not substantiated by the data selected and analysed in this report.”

While NMDRs have been shown to exist, a considerable body of scientific evidence does not support their claimed significance.[6] Moreover, the current testing approaches do not fail to identify or establish appropriate NOAELs in the low-dose range of exposure.[7] Studies claiming NMDRs often suffer from methodological shortcomings, findings have not been reproduced consistently between different laboratories, and the toxicological significance of reported results is often questionable. Therefore, the weight of available scientific evidence supports maintaining the current testing and risk assessment approaches for all chemistries, and changes are not required in relation to NMDRs.

[2] Danish Centre on Endocrine Disrupters. 2013. Input for the REACH review in 2013 on endocrine disrupters (tærskelværdi-projekt, j.nr. MST-621-00050): final report by Technical University of Denmark and the National Institute of Food, Division of Toxicology and Risk Assessment.

[5] National Academy of Sciences. 2014. Review of the Environmental Protection Agency’s state-of-the-science evaluation of nonmonotonic dose-response relationships as they apply to endocrine disruptors.